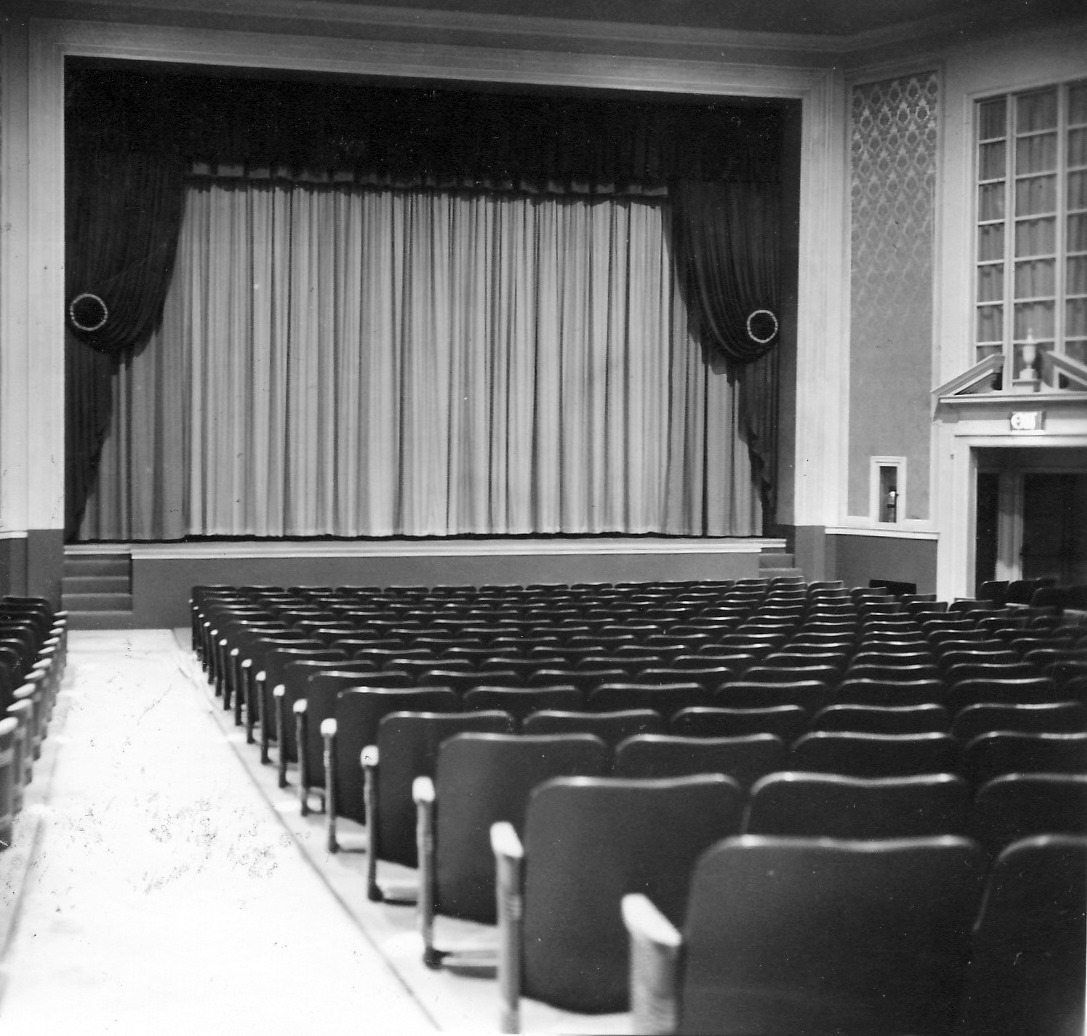 From an article by Karen B. Ransom
I became privy to a scrapbook lent to me about the opening of the Bedford Playhouse in Bedford village on April 30, 1947. I sorted through yellowed articles–unfortunately most with the name of the publication cut off–and historical photos.
The village welcomed the theater with trepidation. They were cautious and determined not to have such a commercial venue change the character of the village. An editorial claimed: “It may change our way of living by bringing crowds from the outlying districts.”
Yet they were comforted by the village’s strong identity, believing their Bedford character could withstand the onslaught of outsiders. Another editorial closer to the opening said: “We move forward as we have always done as we must. The Theater is a part of our Progress.”
The investor and designer of the whole of the building was Pound Ridge resident Joseph H. Stearns, seen as a man of vision. The building was conservative in nature in order to blend with the surrounding area. It was one of the first shopping centers with stores for lease on the ground floor and apartments on the second floor. It was to have an air of “charm and restfulness.”
The design of the interior theater and the technology used was done by Drew and John Eberson. Their firm had designed theaters worldwide, including in Venezuela. It boasted “scientific air conditioning” which allowed smoking in the balcony. It also had the latest in technology–an RCA sound system and the latest on projection engineering which would be “free of distortion and eyestrain.” The builder was A.R. Baker of Bedford village.
The rows of seats were 40 inches apart in order to allow people to access the aisle without bothering the others while they were seated. The seats were fully sprung and upholstered. The walls were covered in gold damask. It had a colonial décor. There was a beautiful mural behind what is now the snack bar created by local Bedford resident Tom Loftia Johnson.
Congratulatory ads were placed in local papers from the new tenants of the building. Walter Stewart’s Market had just opened, offering quality food products. Stewart’s Market was a Bedford landmark for more than 50 years on Court Road–the southern side of the building.
The restaurant that is now The Meetinghouse–still a very popular spot–was originally “The Carousel,” a confectionary and lunch room. Since there was no sign of a contemporary snack bar, moviegoers were urged to enjoy this casual restaurant both before and after the movie. Best wishes were also sent by Thomas C. Grimes Country Real Estate on The Bedford Green, still home to several real estate offices.
It appeared to open with an “invitation only” ceremony and there was only one large screen with a
stage. Officials launched the festivities with the singing of “Columbia Gem of the Ocean” from the
stage. After speeches, the debut movie was “Boomerang,” starring Lee J. Cobb, Dana Andrews and
Jane Wyatt and directed by Elia Kazan.
It was considered in the parlance of the time “a Factual Film,” and local in nature, covering a murder
which occurred in Bridgeport, Conn. in 1924. It was filmed in nearby Stamford with many of the
extras from the Stamford neighborhoods. The Court House used was one in White Plains.
The theater was owned by Irwin Wheeler of the Fairchester Theaters Group. They also owned
theaters in Ridgefield and New Canaan, Conn in Fairfield County. This was their first foray into
Westchester, hence the name Fairchester. There is a photo of him with comedian Lew Lehr in the
lobby. Other celebrities featured on the front page of “The Villager” were Faith Baldwin and Walter
Hampden.
The opening was not without scandal. In the following week, “The Villager” reported that manager
Richard Knight was plagued by rumors that the tickets were the princely sum of three dollars.
He countered with this: “Here’s the dope – for Matinees children are 25 cents, adults 44 cents and
smoking section in the loge 60 cents. In the evening children were 30 cents, adults 55 cents and the
loge 80 cents with smoking allowed.”
Even then there was a penalty for smoking!

Go to FriendsOfBedfordPlayhouse.org to see how you can help!